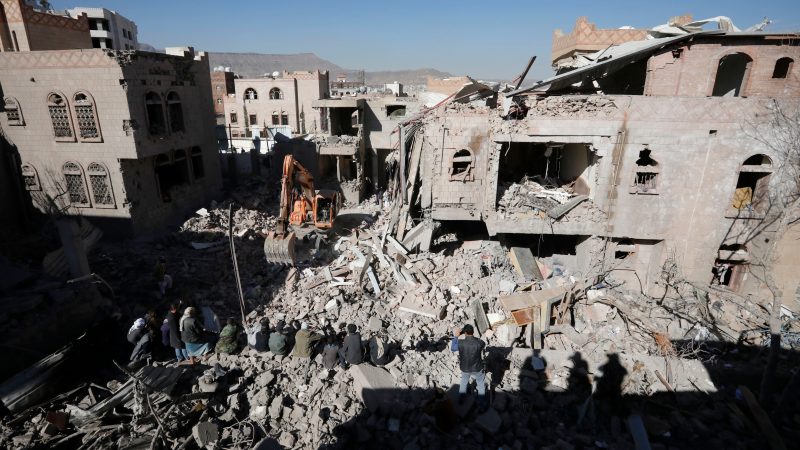 Sanaa residents were combing the rubble for survivors of the strikes that levelled two houses, hours after the Huthis had killed three people Monday in a drone and missile attack on the UAE capital Abu Dhabi.

“The search is still going on for survivors in the rubble,” said Akram al-Ahdal, a relative of several of the victims.

Images from last night Saudi/UAE airstrikes on Sana’a. Hard to understand denial over civilian causalities in Yemen. Even harder to understand why there’s been zero accountability as civilian deaths mount. #yemen #uae pic.twitter.com/En0ZapOg3W

The UAE, part of the Saudi-led coalition fighting the Iran-backed rebels, had vowed a tough response to Monday’s attack, the first deadly assault acknowledged inside its borders and claimed by the Yemeni insurgents.

The attack on the renowned Middle East safe haven of the UAE opened a new front in the seven-year war and followed a surge in fighting in Yemen, including battles between the rebels and UAE-trained troops.

Yemen occupies a strategic position on the Red Sea, a vital conduit for oil from the resource-rich Gulf.

But the deadly Saudi counter-strikes against the Huthis received harsh criticism from UN Secretary-General Antonio Guterres, who said he “deplores” the “numerous civilian casualties,” his spokesperson Stephane Dujarric said.

Guterres “again calls upon all parties to exercise maximum restraint and prevent further escalation and intensification of the conflict,” Dujarric added.

The UAE has demanded an emergency meeting of the UN Security Council.

“This illegal and alarming escalation is a further step in the Huthis’ efforts to spread terrorism and chaos in our region,” the UAE’s ambassador to the UN, Lana Nusseibeh, said in a letter to the Security Council’s president.

‘No end in sight’

The Abu Dhabi attack marked a new phase in the Yemen war and further reduced hopes of any resolution to the conflict, which has displaced millions in what was already the Arabian peninsula’s poorest country.

The United States pledged to hold the Huthis accountable, while Britain, France and the European Union also condemned the assault.

The EU condemned the attack “claimed by Ansar Allah” (another name for the Huthi movement), stating that it increases the risk of further escalation of the Yemen conflict and undermines ongoing efforts to end the war.

The targeting of Abu Dhabi followed intense clashes in Yemen, including advances by the UAE-trained Giants Brigade, who drove the rebels out of Shabwa province.

The defeat dealt a blow to the Huthis’ months-long campaign to capture neighbouring Marib, the government’s last stronghold in the north.

Earlier this month, the Huthis hijacked the UAE-flagged Rwabee in the Red Sea, charging that it was carrying military equipment — a claim disputed by the coalition and the UAE.

The ship’s 11 international crew are being held captive.

Yemen’s civil war began in 2014 when the Huthis seized the capital Sanaa, prompting Saudi-led forces to intervene to prop up the government the following year.

The conflict has been a catastrophe for millions of its citizens who have fled their homes, with many on the brink of famine in what the UN calls the world’s worst humanitarian crisis.

The UN has estimated the war killed 377,000 people by the end of 2021, both directly and indirectly through hunger and disease.

“There is no end in sight for the Yemen war,” Elisabeth Kendall, a researcher at the University of Oxford told AFP.

“Rather, the conflict is escalating and new fronts are opening up, both domestically and now regionally.”