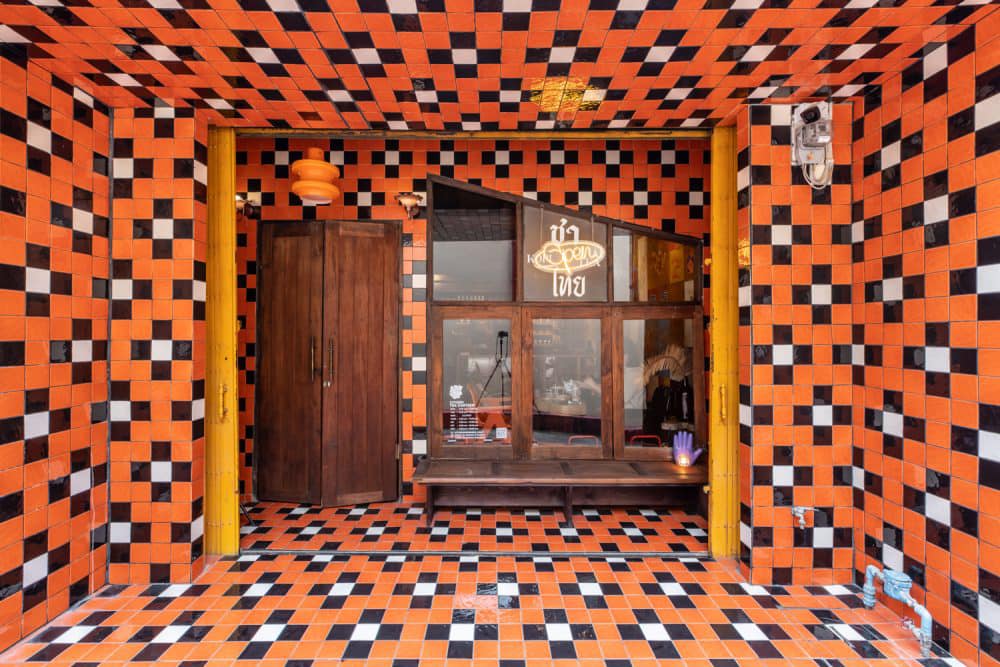 Bangkok is a living and breathing creature in its own right. It grows with new spots and hidden treasures popping up everywhere everyday. It’s a city for everybody: every neighbourhood, every street, every soi has a different personality to offer. And it’s truly worth exploring them all. The Thai capital is a city worth getting to know well because it will reward you handsomely — either with an out-of-the-way café that serves the best matcha latte you’ve ever had, or a little bookshop you can call your very own hideaway. The LSA Neighbourhood Guides aim to help you get started towards exploring the various wonders around Bangkok. For this edition, we’re walking the long, old Charoenkrung road, Bangkok’s blossoming creative district and rustic hipster haunt.

Famed as Bangkok’s oldest road, Charoenkrung still retains its historic aesthetic whilst developing into the city’s coolest artsy hub. The road exudes an anachronistic glamour, with authentic vintage architecture housing some of the trendiest cafés and bars. Unsurprisingly, it is a hotspot for some of the most Instagram worthy places in Bangkok. Charoenkrung is also a pretty long road, and all its sprawling hidden gems really make it a must-visit for hundreds of reasons. But here, we’ve selected just the top 12 things we really love about this magical, nostalgic road.

Around the time TCDC (Thailand’s Creative Design Centre) moved to Charoenkrung in 2017, the neighbourhood saw a boom in its art scene. It’s no surprise that these charming low-rise streets and retro surroundings are attracting so many young creatives. A stroll through Charoenkrung is always slow and leisurely, mostly because you’ll be stopping and staring at lots of fantastic wall murals along the way.

Brunch goals are made of Sarnies. The ultimate hipster hangout serving hearty breakfast dishes from loaded toasts to large plates of comfort fry-ups is one of our favourite reasons to visit Charoenkrung. Order everything on the ‘Eggy Page’ and don’t forget to take away one of those ‘F*cking Good Brownies’. For a more locally-inspired cuisine, opt for the warehouse-turned-restaurant DAG which serves up creative Asian dishes in a casual environment. Of course, there is also Samlor Restaurant, helmed by Chefs Joe and Saki, formerly of 80/20.

There are a few sweet corners in Charoenkrung, making it a must-lovers for those with a serious sweet tooth. Milkshakes, baked goods, and more, The Hidden Milkbar is as sweet as it gets, as the Aussie milk bar serves as a highly ‘grammable spot for dessert. For those who prefer Asian desserts, Homu Dessert Bar makes for a fine option, serving up Japanese confections. The other one to have on your radar is Sweet Pista Bangkok. Other than good food, the warehouse-turned-restaurant also serves delicious desserts.

Charoenkrung is the place to go if you’re looking for antiquated houses and historical architecture. The queen of these would be So Heng Tai, an ancestral Chinese mansion hidden in the narrow winding alleys of Talat Noi. The traditional home has been turned into a very chill hangout space, and you can order Som Tam or sip iced coffees on the balconies overlooking the courtyard. A bonus tip? Nip over just opposite the mansion for riverside drinks at the hipster wooden café, Baan Rim Nam.

5. The coolest bars in town

No matter how hard other places try in Bangkok, watering holes and speakeasies can never feel as cool as they do in Charoenkrung. The rustic buildings and run-down warehouses make brilliant hideaways for the it-bars of the area, giving them a kind of charm and effortlessness that they could never have in Thonglor. Here, we’ve got one of Asia’s 50 best bars, Tropic City, reigning over the neighbourhood with their tiki cocktails and bangin’ playlist. Central: The Original Store’s timeless bar SIWILAI Sound Club is a must-visit for city dwellers. The first floor is a jazz bar and the second floor is an Audiophile bar. It’s as groovy as it gets, really.

The thing about Charoenkrung is that it’s very easy to walk around and get from place to place. However, it’s also quite a long road and your feet may start to feel the toll. Pop into Erb Spa in Charoenkrung 30 for a great foot or full body massage done with the spa’s very own organic oils and balms. It’s a cool, quiet break and you’ll smell absolutely amazing afterwards.

7. The best of fine dining

Charoenkrung may be better known for hipster cafés and traditional street eats, but it’s far from a stranger to the Michelin star. Around this neighbourhood is both 80/20 for some French haute cuisine and Mezzaluna, the two Michelin-starred restaurant (with prices almost as high as its location at the top of Lebua). Located on the top floor of Central: The Original Store, fine dining outlet Aksorn boasts an ever-evolving menu that serves the best of Thai cuisine. We also can’t forget Jua either for their more casual yet still exquisite Japanese izakaya.

8. The best of non-fine dining

And for when you don’t need a Michelin star to satisfy your gastronomic needs, Charoenkrung also offers some of the best street eats in the city. Staying close to Chinese ancestral roots, you’ll find many traditional dishes here without having to brave the crowds and queues on Yaowarat Road. However, we always head for Tuang Dim Sum for some of the best, no-frills dim sum you could ask for. For the best open-faced gyoza in town, Wong-style dumpling shop Feng Zhu is it.

Creative space Citizen Tea Canteen of nowhere features artisanal products made by local craftsmen, with the intention to empower underdog cultures. It’s the product of local artist Saran Yen Panya of 56th Studio and is the perfect place to endorse and embrace local culture. Saran brings everyday Thainess to life by incorporating pop culture and a splash of colour. For an antique-looking café, check out Hong Sieng Kong. Another antique one to visit is the vintage Chinese-house-turned-restaurant Patina Bangkok, a place that serves both cafe and bar menus. La Cabra Bangkok is a standout coffee shop in the creative district. This Scandinavian roaster embraces minimalism.

When in Charoenkrung, make sure to visit Copenn. Copenn is a design concept store and perfumery that sells all things scented. From candles to essential oils to incense cones to diffusers. Another chic design store to add to your places to visit is Central: The Original Store. If you don’t want to travel around too much, this is a one-stop destination offering everything from a library to fine dining to a cool bar.

11. The coolest skate park in Bangkok

A recent addition to the repertoire of cool, groovy places in Charoenkrung, Jump Master Skate Haus is where all the cool kids are hanging out. Apart from skating, this new skate park also hosts fun events

This is known as the creative district for a reason. Unlike most other places in Bangkok, this area is full of cool art galleries and exhibition spaces to pop into and look around. They’re often multi-functional too, some being bars, cafés, and shops, whilst also showcasing a few contemporary works by young artists. There’s Speedy Grandma, Warehouse 30, Serindia Gallery, River City Bangkok, ATT 19, and more. Be sure to head to Bangkok’s artistic pride, TCDC, for conceptual exhibitions and creative resources.

This article first appeared on Lifestyle Asia Bangkok on 17 October 2019, and has since been updated for content.